Influx of Amano Based Cosplays

The Amano bug has caught me again.  I currently have at least three, possibly four or five, Amano cosplays either planned or in progress.  I’ll be redoing my Amano Yuna to look more like these artwork pieces.

I’m using a darker color scheme for her, mostly blues and blacks and silvers, to play off her name meaning moon.  In addition, I’m using a flowy design to match the above artwork and logo for Final Fantasy X, and I’ll be incorporating numerous hibiscus motifs in the design as well.  I might post a picture of the design later.  I’m really excited to start working on her.  So far I have most of the beads as well as the shirt and materials for the skirt and trims.  I’m so excited!!!

Another Amano cosplay I have in the works is Young Rydia.  I’m really excited to cosplay the little summoner from Final Fantasy 4 as she is a longtime favorite of mine.  I’m using a number of references for her design (see below) as I have yet to draw a final design of my own.  I feel like I’m a kid in a candy store who is constantly pulling wants of the selves to add to the looming pile of candy within the cart when it comes to this cosplay.  I just can’t decide on a final design because I keep adding to the concept in my head.  If I finalize a design, I’ll post it along with my Yuna design (and subsequent amano based designs) if I get the nerve to post my designs online.  Until then here are the references I’m using.

Back to cosplay…I’m using a variety of fun colors intermixed with earthier tones to add a youthful yet refined feel to her design while keeping with the overall feel that she is from a place called Mist.  The colors range from deep purple to bright pink to subtle orange and gold with a wide range of intermixed greens.  I have most of the fabrics and beads in possession with the wig on the way.  The only major pieces of the cosplay I’m yet missing are the shoes.  I have yet to find a pair that fit my ideal concept and may resort to making the desired pair if one is not found.

Third on my rather quickly increasing list is Serah Farron from Final Fantasy XIII.  She is my favorite character from FF XIII and one of my favorite FF characters.  I’m doing an Amano version of her because I love the piece Amano did of Snow and her watching the fireworks. 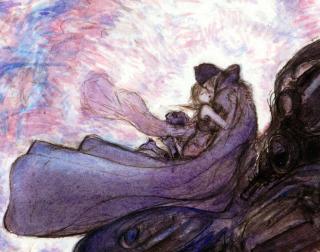 I don’t have a sketch of my design for her yet, but I know the color scheme.  I often have colors worked out before designs.  I’m using a slightly different palette from her original design, pinks and blues and whites, maybe a red, instead of whites and pinks and reds and blacks.  The design on the other hand is going to be quite different while recognizable.  I’ll post more on her as the costume progresses.

The final two cosplays on my current Amano list are Porom from Final Fantasy IV and possibly Aerith from Final Fantasy VII.  I love Porom’s design and want to play off her amano artwork while possibly incorporating her sprite design.  I have yet to design most of this cosplay.  Aerith, on the other hand, is a longtime favorite of mine.  I have wanted to cosplay since I started cosplaying (there’s even a post or two on her in the back files of this blog), but I have never completely decided on a version of her I want to do.  Since she is a very popular character to cosplay, I want my rendition of her to stand out from the others that litter cosplay sites everywhere.  Not that it’s a bad thing, she is an awesome character, it’s just hard to stand out among so large a crowd.  Hence, why I’ve been leaning more toward an Amano version.  She is another cosplay I have yet to design or even really think about doing so, but when and if I do I shall post more.

Narnianna is a costume and needle artist from the great northwest state of Idaho. She began needle arts in 2002, costuming in 2009, and attending conventions in 2010. Since then, she branched into many venues of costume recreation and design, such as historical, anime, video games, movie, television, and original design in both science fiction/fantasy and historical as well as many avenues of needle arts such as crocheting, knitting, embroidery, and beading. Each project is a work of love and has a unique story behind it. It is here she expounds those stories into tales and thoughts of her experiences in the crafts she loves.
View all posts by narnianna »
← Sakura Con Cosplays
Finally, A Progress Update →